I am very excited to be partnering with Simon & Schuster in order to bring you guys this giveaway! The giveaway is U.S. only, (sorry international followers! I will be hosting an international giveaway very soon!) And the book being given away is Pacific Burn by Barry Lancet, which came out today!

“Pacific Burn is a page-turning, globe-spanning tale of murder, suspense, and intrigue that grabs and holds your attention from beginning to end. Barry Lancet is truly a gifted author, and his character of Jim Brodie is unlike any private investigator you’ve ever encountered in literature.” —Nelson DeMille, New York Times bestselling author of Radiant Angel

Before the link to the actual giveaway, I would like to first share some images and info about the book with all of you (courtesy of Simon & Schuster): 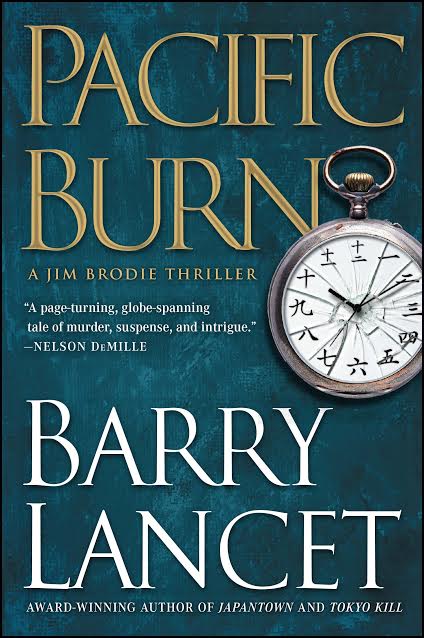 Summary: In the third book in “what will likely be a long and successful series” (San Francisco Magazine), Japanese antiques dealer and PI Jim Brodie goes up against the CIA, FBI, Department of Homeland Security—and a killer operating on both sides of the Pacific.

In recognition for his role in solving the Japantown murders in San Francisco, antiques dealer and sometime-PI Jim Brodie has just been brought on as the liaison for the mayor’s new Pacific Rim Friendship Program. Brodie in turn recruits his friend, the renowned Japanese artist Ken Nobuki, and after a promising meeting with city officials and a picture-perfect photo op, Brodie and Nobuki leave City Hall for a waiting limo.

But as soon as they exit the building, a sniper attacks them from the roof of the Asian Art Museum. Quick thinking allows Brodie to escape, but Nobuki ends up hospitalized and in a coma. Brodie soon realizes that, with the suspicious and untimely death of Nobuki’s oldest son a week earlier in Napa Valley, someone may be targeting his friend’s family—and killing them off one by one.

Suspects are nearly too numerous to name—and could be in the United States or anywhere along the Pacific Rim. The quest for answers takes Brodie from his beloved San Francisco to Washington, DC, in a confrontation with the DHS, the CIA, and the FBI; then on to Tokyo, Kyoto, and beyond, in search of what his Japanese sources tell him is a legendary killer in both senses of the word—said to be more rumor than real, but deadlier than anything else they’ve ever encountered if the whispers are true.

While I have not yet read this book, I have added the entire series to my to-read shelf on Goodreads! If you know me well enough, you will be aware that I like mystery novels, and I also love anything to do with Japan! I’m upset with myself for not having heard of this series before now!

And finally, without further ado, please click the image below to be re-directed to the Rafflecopter giveaway page!

THANK YOU FOR READING MY POST (AND MY BLOG IN GENERAL), AND ALSO, GOOD LUCK TO ALL OF YOU!