I tend to be unable to keep up with writing these posts on time. I blame it on the Mondays. Yes, the Mondays are too blame, haha. But seriously, with working two jobs, it’s very difficult to find time on Mondays (especially) to write up a post from scratch! Maybe if the questions were posted in advance it would help? But probably not….because Top Ten Tuesday and Feature & Follow Friday do that and I miss writing posts for those memes too. Anyway, enough blabbering…let’s get to the Musing Monday funsies!

For those of you who don’t know, Musing Mondays is hosted by the awesome Ambrosia every Monday. This is a book blog meme where participants have to answer one of the pre-set prompts of (I’m currently reading…; Up next I think I’ll read…; I bought the following book(s) in the past week…; I’m super excited to tell you about (book/author/bookish-news)…; I’m really upset by (book/author/bookish-news)…; I can’t wait to get a copy of…; I wish I could read ___, but…; OR I blogged about ____ this past week…). And you also have to answer an additional random question which is different every week!

This week I’ll be answering one of the weekly prompts, before answering the random question for this week…

I’m super excited to tell you about…

…The Breaking Light by Heather Hansen! It came out on Saturday (April 1st) and although I am unable to read it due to my busy reading schedule, I will be reading it as soon as I am able! I also really wanted to tell you guys about it because it sounds like a really fun read! Judging from the cover and description, it sounds a bit like a mixture of Blade Runner (a movie which first came out in 1982, and the sequel, Blade Runner 2049, to which is being released this year) and The Thousandth Floor by Katherine McGee (a book which I have not read yet…so I am not sure if my assumption is accurate, hehe)! 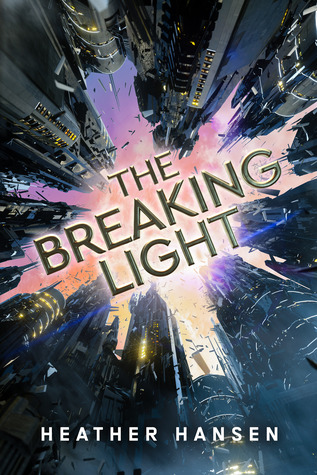 But anyway, here is the cover and description for you all!

In a stratified society where contact with the sun is a luxury reserved for the elite, those kept prisoner in the darkness will do anything to find the light. Arden—beautiful, street-smart, and cynical—is one of the citizens of the lowest level, known as Undercity, of an off-world colony. A blackout band traps Arden in her district, but as sister to the leader of the most powerful gang in Undercity, she has access to the Above.

There she meets Dade, one of the few lucky enough to be born into the sun-kissed families who reside in the towers soaring above the rest of the city. But life isn’t perfect in the sky. Dade, desperate to escape his upcoming arranged marriage, has a secret of his own, and he’s willing to risk everything for it.

An unlikely romance develops between the two teens—but their love faces opposition from above and below. When her gang pressures Arden to help break the grip of the elite and end Dade’s interference with their drug trade, she is forced to make a deadly choice between love and family loyalty. But will the brewing class war destroy the world around them first?

Sounds fun, right?! I hoping to be able to read it in June, or (more realistically) July! If you’ve taken a glance at my reading and review schedule recently, you’ll know that reading it before then is just impossible! But anyway, I really look forward to reading it, and I hope that those of you who are interested in it will bet to read it waaaay before I do!

And now I will be answering this week’s random question:

Are there any songs that make you think of certain books or scenes from books? If so, which songs/books?

Of most definitely! But there are really too many songs and too many books which this happens with for me to think of on the spot! Maybe rather than songs, though, I should say that the more common thing is a particularly-themed playlist to go with particularly-themed books. Say I’m reading a book that’s set in historical Transylvania (for example), I would look for songs or playlists (or compile my own) which contain old and traditional Transylvanian music because it helps me to experience the story more thoroughly! I also did this recently with The Star-Touched Queen and A Crown of Wishes, where I found this really awesome Indian music playlist on Spotify, and it really helped me feel like I was in the story too! Does anyone else do this?

I REALLY DO HOPE THAT A LOT OF YOU WILL GET TO READ THE BREAKING LIGHT BEFORE I DO! AND IF YOU DO, PLEASE SHARE YOUR OPINIONS WITH ME! ALSO, WHAT ARE YOUR THOUGHTS ON CERTAIN SONGS REMINDING YOU OF CERTAIN BOOKS? OR MUSIC AND READING IN GENERAL? LET ME KNOW IN THE COMMENTS BELOW OR SHARE YOUR MUSING MONDAY POST WITH ME!