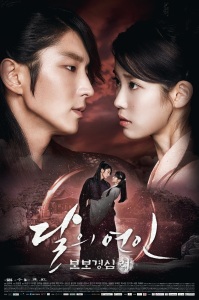 Synopsis: When a total eclipse of the sun takes place, Hae-Soo (IU) travels back in time to the Goryeo era. There, she falls in love with Wang So (Lee Joon-Gi) who makes other people tremble with fear.

I got hooked on this drama from the very first episode. From the first few minutes, in fact! I was already familiar with the main cast, as I had seen them in other dramas before, and I knew them to be amazing actors. The story, while I initially believed to be a typical time travel plot, surprised me in that it was a little more unique than that.

There was also quite a bit of humour, and I was really enjoying myself for little over a half of the episodes. The romantic plot, however, then became confusing for me. I usually cheer for the main couple, but the manner in which the romance between the female lead, and the “other man” confused me, in that I preferred it to the female lead’s with the male lead’s. That’s not to say that I disliked the male lead, he’s played by one of my favourite actors, in fact, and I loved his character. It’s just that I simply did not ship him as strongly with the female lead as I would have under different circumstances…if that makes sense.

There is also the fact that after the mid-point in the series, the comedy started to disappear, and the plot became progressively more tragic. I found myself crying more than laughing, and while the plot was still good, I found myself missing the “happier days,” and the main reasons why I started watching this drama to begin with.

The ending was also unsatisfactory for me, and I don’t think that I will ever find it satisfying unless they make another season in which the same plot, with the same characters, and same actors continues from where it left off. And that is all I can say without spoiling more than I fear I might already have.

If I do recommend this drama, it is with the warnings I have included above. It was very aesthetically pleasing, and the costumes were impeccably made, and I know that a lot of work has gone into putting this drama together…therefore if you are more interested in such things, or experiencing a Korea as it may have been in the past, rather than watching a happy plot, I do recommend it!

You can watch this drama too! Just click on the icon below to get redirected to the streaming site which I used, Dramafever:

I have a paid account, and sadly only episodes 1 and 2 are available to free accounts. I am sure that this drama is available on other sites, however.

NONE OF THE IMAGES ARE MADE OR OWNED BY ME. THANK YOU FOR READING MY KOREAN DRAMA (KDRAMA) REVIEW! DO YOU WATCH KDRAMAS, OR HAVE YOU BEEN MEANING TO? OR HAVE YOU NEVER HEARD OF THEM BEFORE? I’M CURIOUS! PLEASE LET ME KNOW IN THE COMMENT BELOW!