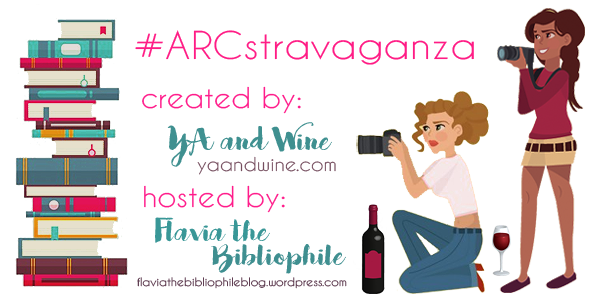 Happy #ARCstravaganza day everyone! How was everyone’s weekend? Or did your weekend not end yet because you get a long weekend like me? Hehe. I’ll probably be working anyway though. Back to the event though, the book that I picked for this week was actually surprise book mail! I had requested it months ago, but hadn’t heard anything back, and therefore assumed that I hadn’t been approved. But surprise! It came in the mail anyway, haha, and it is gorgeous!

For those of you coming across this meme for this first time, it was originally created by Krysti at YA and Wine, and hosted by her, and Sarah at The Clever Reader. Due to personal circumstances, however, they have had to let it go. We were all very sad to see the meme go, but then Krysti asked me if I wanted to take it over, and I said yes!

For those of you unfamiliar with #ARCstravaganza, it’s a meme meant to encourage book bloggers to show off and discuss their ARCs (advanced reader copies)! If this sounds like something for you, please check out the info page about the meme here. Another change is that #ARCstravaganza participants can share their posts on their blogs, Instagram, or Twitter (or all three)! Please just be sure to tag your social media posts with the hashtag, or share a link to your blog post on my blog post for each week, so that we can find it!

Like I said above, I had no idea this book was coming in the mail! I’m therefore quite booked (pun intended) from September to November, but will try to read this book around its publication anyway, somehow… I read the first book in the series, The Hundredth Queen in early June, and really enjoyed it (review here). I wanted to read the sequel right away, and although it wasn’t out yet, and I had to wait, I was happy that I would only have to wait until later this year. I was surprised, and quite pleased to see that the wait between book 1 and book 2 would not be crazy long!

One of the reasons why I really enjoyed this book, is because the geographical setting, and the culture, in this series is based upon a mix from India and possibly South Arabia? Maybe someone who knows the specifics on this can let me know? Haha. Anyway, I thought it really cool that the covers feature henna-like designs on (I’m assuming) Kalinda’s hands, and also a sari (traditional dress for women in India) in the background. The first book features a beautiful, deep-red sari, while this one displays a gorgeous purple one. And here is a funny story: I was actually wearing a mint sari while attending a Bengali wedding when my dad told me that this book came in the mail, haha. It was very interesting timing! In my opinion anyway. Bur yes, I’m excited to read what will happen next, and I’m curious to see how a possible love triangle will be handled in this book. I’m not a fan of love triangles, but can definitely appreciate them if they’re done realistically, and done well!

Synopsis: In the second book in The Hundredth Queen Series, Emily R. King once again follows a young warrior queen’s rise to meet her destiny in a richly imagined world of sorcery and forbidden powers.

Though the tyrant rajah she was forced to marry is dead, Kalinda’s troubles are far from over. A warlord has invaded the imperial city, and now she’s in exile. But she isn’t alone. Kalinda has the allegiance of Captain Deven Naik, her guard and beloved, imprisoned for treason and stripped of command. With the empire at war, their best hope is to find Prince Ashwin, the rajah’s son, who has promised Deven’s freedom on one condition: that Kalinda will fight and defeat three formidable opponents.

But as Kalinda’s tournament strengths are once again challenged, so too is her relationship with Deven. While Deven fears her powers, Ashwin reveres them—as well as the courageous woman who wields them. Kalinda comes to regard Ashwin as the only man who can repair a warring world and finds herself torn between her allegiance to Deven and a newly found respect for the young prince.

With both the responsibility to protect her people and the fate of those she loves weighing heavily upon her, Kalinda is forced again to compete. She must test the limits of her fire powers and her hard-won wisdom. But will that be enough to unite the empire without sacrificing all she holds dear?

THANKS SO MUCH FOR READING MY #ARCSTRAVAGANZA POST! HAVE YOU READ THIS BOOK? OR, IF YOU HAVEN’T YET, ARE YOU LOOKING FORWARD TO READING IT? OR NOT? WHICH UPCOMING RELEASES ARE YOU EXCITED FOR? AND WHICH PAST 2017 WERE YOUR FAVOURITES? LET ME KNOW IN THE COMMENTS BELOW!